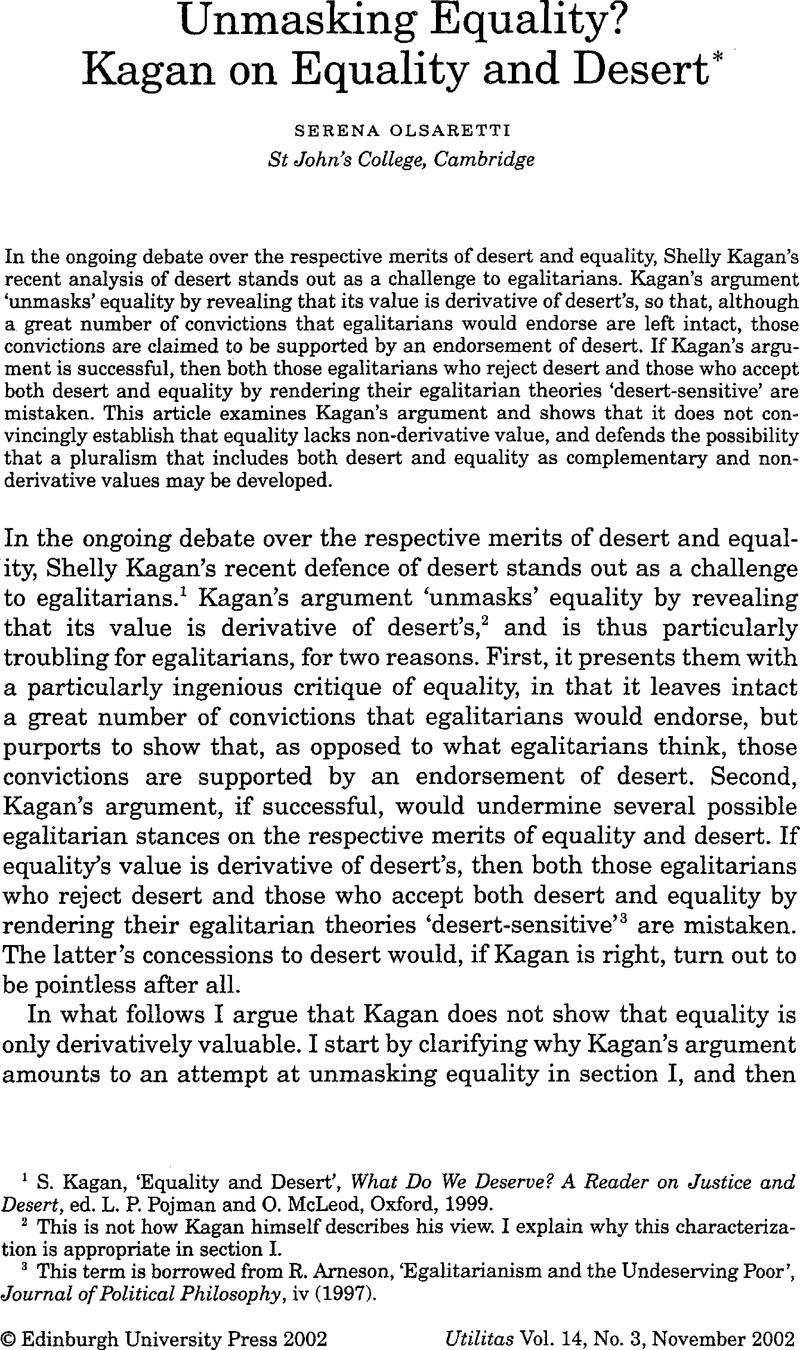 2 This is not how Kagan himself describes his view. I explain why this characterization is appropriate in section 1.

3 This term is borrowed from Arneson, R., ‘Egalitarianism and the Undeserving Poor’, Journal of Political Philosophy, iv (1997)Google Scholar.

4 ‘Although equality is widely thought to have intrinsic moral significance, many moral philosophers have their doubts about desert. Interestingly, I think this gets things backwards. Or so I will argue.’ See Kagan, p. 299, footnote omitted.

5 Raz, J., The Morality of Freedom, Oxford, 1986, pp. 177Google Scholar f. The distinction between derivative and ultimate intrinsic value is used to identify different egalitarian views in Clayton, M. and Williams, A., ‘Some Questions for Egalitarians’, The Ideal of Equality, ed. Clayton, M. and Williams, A., Basingstoke, 2000, p. 5Google Scholar.

6 Raz uses the example of a person's relationship to her dog, which contributes to making the person's life a better one because of that. The relationship is not only instrumentally valuable - it is not simply valued as a cause of some pleasant sensations-but rather, Raz says, ‘[i]ts value is in its being a constitutive part of a valuable form of life’ (Raz, p. 178).

7 Although, as I have mentioned, Kagan himself characterizes his argument differently, I see no reason why he should want to object to the characterization proposed here. At any rate, I should underline that my criticism of Kagan's argument does not hinge on which of the two characterizations is adopted.

8 I am here limiting the exposition of both the concepts Kagan employs and the arguments he develops to what is necessary to examine whether Kagan succeeds in levelling a critique against equality.

10 Although Kagan himself explicitly sets out to deal with moral desert only, it is an open question whether his argument may be extended to deal with other types of desert than moral desert. Some of the supposed intuitive force of the cases Kagan presents seems to be eroded where other types of desert than moral desert are concerned, such as desert on the basis of efforts individuals make, or on the basis of the outcome of their efforts. I return to this point in section III.

11 Because I am here omitting reference to a number of other concepts that are employed by Kagan, his argument as reported here is a simplified version of the argument he offers. This simplification does not, I believe, misrepresent Kagan's argument or bias the analysis of it.

12 Constructing such a case turns out to be difficult, for it appears that in various seeming instances of this case, where restricted equality would favour A, a certain version of desert, namely ‘curved desert’, would also similarly favour A. Curved desert expresses the idea that, the further one is from one's peak (one's absolute deserts), the greater the significance of each additional unit change in well-being. The cases at issue in which curved desert seems to favour what restricted equality would favour, namely, helping A, are as follows. A and B are, ex hypothesi, equally deserving, that is, their peak is the same; and, ex hypothesi, A is worse off than B, which means that A is slightly further away from his peak than B is from hers. Restricted equality supposedly favours A's claim; but so does curved desert, since, given A's slightly greater distance from his peak than B's from hers, each additional unit of well-being A gets has more significance than each additional unit of well-being B gets.

13 This is so as to prevent curved desert from kicking in.

16 The term ‘luck egalitarians’ is borrowed from Anderson, E., ‘What is the Point of Equality?’, Ethics, cix (1999)Google Scholar. Unlike luck egalitarians, those who do embrace a purely egalitarian ideal will insist that equality does provide a reason to favour A, although they may agree that that reason is overridden by considerations of desert. Just as Kagan does not counter the intuition he opposes with arguments, such egalitarians will stand by their conviction without arguing for why Kagan's is to be rejected.

17 The construction of the Twin Peaks case I have in mind here is one in which equality is pure equality, and desert tracks responsibility, so that the deserved inequalities are inequalities that reflect people's comparative exercise of responsibility. If desert is understood differently, sanctioning inequalities which individuals are not responsible for, then luck egalitarians diagnosis of the Twin Peaks case will not favour the demands of desert. (See p. 394 for an illustration of this view.) We have reason to favour the construction of the Twin Peaks case on which luck egalitarians would indeed favour the demands of desert, however, to the extent that it is one about which it is certain that most people would agree that there is no reason to help A.

18 If desert is such that individuals are responsible for what they deserve, then no conflict between desert and equality would arise. Equality would require the rectification of undeserved inequalities, and the Twin Peaks case would not present itself.

19 From now on, by ‘egalitarians’ I refer to those egalitarians who call only for the rectification of those inequalities due to differential brute luck.

26 I say ‘in principle’ because whether or not desert may be adopted within an egalitarian theory without sacrificing the theory's egalitarian spirit will depend on what interpretation of the principle of desert is being considered, and whether one can be defended that does not conflict with fundamental egalitarian convictions. If the principle of desert that is considered is one on the basis of features that individuals cannot be deemed responsible for, for example, then egalitarians will have to account for why desert thus understood, which is in conflict with equality, will (sometimes) outweigh the demands of equality.

28 The justice of that distribution is defined in terms of equality, so that a just distribution of burdens and benefits is one that realizes equality of whichever currency of egalitarian justice is chosen.

29 See n. 17 on how different constructions of the Twin Peaks case are possible given different interpretations of the ideals of equality and of desert.

31 One possibility is that effort only be viewed as an appropriate desert basis. It would be essential here that effort is not viewed as a desert basis in so far as it is thought to be costly, lest this view collapse into the compensatory view of desert. Another possibility may be to defend the interpretation of desert as desert on the basis of choices people make and the activities they undertake, so that people are only deserving when equal background conditions are in place, allowing their activities and choices to yield outcomes they can be deemed responsible for.

32 I would like to thank Ian Carter, Roger Crisp, Fred Feldman, and an anonymous referee for their helpful comments. I am especially grateful to Andrew Williams for extensive comments on a previous version of this paper.