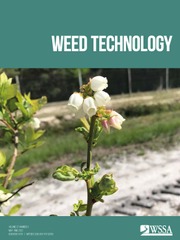 In sweetpotato, yields are maximized by maintaining fields weed-free through vine closure, approximately 6 to 8 wk after transplanting (WAP) (Seem et al. Reference Seem, Creamer and Monks2003). Sweetpotato producers in the southeastern United States rely heavily on a combination of PRE herbicides, between-row cultivation, and hand-removal to control weeds. POST weed control options in sweetpotato are limited (Kemble Reference Kemble2015). Clethodim, sethoxydim, and fluazifop are registered for use in sweetpotato to control emerged grasses. Glyphosate and carfentrazone-ethyl can be POST-directed between rows, however, POST-directed applications in sweetpotato are difficult given the crop’s decumbent growth habit. Weeds within the planted row often escape between-row cultivation. Although hand-removal and hoeing of broadleaf weeds is common in sweetpotato production systems, and many fields are hand-weeded at least once each season to control escaped weeds, hand-weeding is expensive and labor-intensive.

The objective of this study was to determine the effect of simulated glyphosate drip on sweetpotato, including changes in yield and storage root cracking.

Field studies were conducted in 2009 and 2014 to determine sweetpotato response to simulated glyphosate drip. To determine what glyphosate volumes to use in the study, 200 drops of water were collected from a standard Dixie® wick applicator (Dixie Wick Company, 5807 Highway 11 North, Grifton, NC) that leaked from the cotton canvas sleeves. The average drip volume observed was 0.08 mL. Based on this observation, three glyphosate (Roundup WeatherMax®, Monsanto Company, 800 North Lindbergh Boulevard, St. Louis, MO) solution drip volumes, 0.16, 0.32, and 0.48 mL (140 g ae L–1); and four application timings, 4 WAP, 6 WAP, 8 WAP, and 4 WAP followed by 6 WAP followed by 8 WAP; were selected. A non-treated check was included for comparison. In 2009, nonrooted ‘Covington’ sweetpotato vine cuttings (slips) were transplanted 30 cm apart into rows 106 cm apart on June 5 at the Horticultural Crops Research Station in Clinton, North Carolina (35.0227°N, 78.2794°W) into a Norfolk loamy sand (fine-loamy, siliceous, thermic Typic Paleudult) with a pH of 5.9 and <1% humic matter. In 2014, ‘Beauregard’ sweetpotato slips were transplanted 30 cm apart into rows 1 m apart on July 7 at the Pontotoc Ridge–Flatwoods Branch Experiment Station in Pontotoc, Mississippi (34.1331°N, 89.0063°W) into a Falkner silt loam with a pH of 6.9 and 1.3% organic matter. Plots consisted of two rows; the second row of each plot was treated. All plots were maintained weed-free throughout the growing season by hand-removing emerged weeds weekly.

Treatments were applied to one newly expanded leaf located within the planted row for each sweetpotato plant using an adjustable pipetter (100 to 1,000 µL; Fisherbrand® Finnipipette® II). The experimental design was a randomized complete block with five replications in 2009 and four replications in 2014. Data collected included visual estimates of crop injury on a scale of 0% (no injury) to 100% (crop death) 6, 8, and 10 WAP. Sweetpotatoes were harvested 17 WAP using a chain digger, and were hand-graded based on their diameter into jumbo (>8.9 cm), no. 1 (>4.4 cm but ≤8.9 cm), and canner (>2.5 cm but ≤4.4 cm) (USDA 2005). Marketable yield was calculated as the sum of the jumbo, no. 1, and canner grade yields. After grading, storage roots exhibiting longitudinal cracking were separated and weighed, and the percentage of cracked roots by weight was determined for each grade.

Due to a lack of glyphosate solution volume by application timing interaction, the effect of glyphosate solution volume was analyzed across application timings and the effect of application timing was analyzed across solution volumes. Due to a lack of treatment by year interaction, data were analyzed across 2009 and 2014. Approximately 1 wk after treatment, plants displayed chlorosis at the growing points. By 2 wk after treatment, injury was apparent in the form of necrosis and overall plant stunting. At 6 WAP, injury from glyphosate applied 4 WAP was 71% (data not shown). At 8 WAP, sweetpotatoes treated 4 WAP were 65% injured, and sweetpotatoes treated 4 and 6 WAP were 78% injured. Glyphosate applied 6 WAP resulted in only 26% injury at 8 WAP. By 10 WAP, sweetpotatoes in adjacent rows had grown into the treated rows, making visual injury ratings difficult to determine without disturbing the plots. Sweetpotato injury was not affected by solution volume. This result differs from those reported in other vegetable crops, where crop injury increased as glyphosate rate increased (Felix et al. Reference Felix, Boydston and Burke2011, Reference Felix, Boydston and Burke2012; Gilreath et al. Reference Gilreath, Chase and Locascio2000; McNaughton et al. Reference McNaughton, Sikkema and Robinson2012; Santos et al. Reference Santos, Gilreath, Esmel and Siham2007). The method of application utilized in the present study differed from other off-target glyphosate research in that applications were not made in a broadcast manner, and solution volume, not herbicide concentration, differed among treatments. Glyphosate solution was applied to a single sweetpotato leaf. Immediately after application, solution accumulating on the leaf surface rolled off the sweetpotato leaf and fell onto either sweetpotato leaves lower in the canopy or the soil.

Table 1 Effect of simulated glyphosate drip volume on sweetpotato yield at Clinton, North Carolina in 2009 and Pontotoc, Mississippi in 2014.

Table 2 Effect of simulated glyphosate drip timing on sweetpotato yield at Clinton, North Carolina in 2009 and Pontotoc, Mississippi in 2014.

Because environmental and cultural conditions differed each year, the authors are uncertain why root cracking data were influenced by treatment in 2009 but not in 2014. It is plausible that the effect of variety is responsible for a portion of this difference. Covington was planted in 2009 and Beauregard in 2014. Covington has been documented to be more susceptible to abiotic stressors. Dittmar et al. (Reference Dittmar, Monks, Jennings and Schultheis2013) reported that Covington displayed greater storage root injury than Beauregard in response to halosulfuron-methyl applications, and that applications made 22 and 31 DAP to Covington resulted in unacceptable incidence of black blistering on the skin and red-brown spots on the flesh. When treated with ethephon (2-chloroethylphosphonic acid), Covington also had greater incidence and severity of internal necrosis, a physiological disorder in sweetpotato that results in brown to black flesh at the proximal end of the storage root, than did Beauregard (Clark et al. Reference Clark, da Silva, Aranibia, Main, Schutlheis, Pesic-vanEsbroeck, Jiang and Smith2013).

The present study utilizes a worst-case scenario in which all sweetpotato plants in a plot are subjected to simulated off-target glyphosate drip. In a production environment it is highly unlikely that every plant would be exposed to 2 to 6 drops of herbicide solution. Additionally, the impact on overall production within a field may not be as extreme as our results suggest. If a sweetpotato plant in a commercial production setting is exposed to an off-target glyphosate drip and is stunted or killed, adjacent plants will quickly fill in that void and benefit from additional light, water, and nutrient resources that would have been used by the affected plant. The impact of sweetpotato injury on the yield of adjacent uninjured rows was not measured in the present study. However, Main and Thompson (Reference Main and Thompson2000) reported that when a single sweetpotato plant was missing, plants in the same row and next to the missing plant tended to have greater yields of all grades of sweetpotato.

Sweetpotato tolerance to simulated glyphosate drip increased the longer plants were established prior to glyphosate exposure. However, given that the sweetpotato critical period for weed control is from 2 to 8 WAP (Seem et al. Reference Seem, Creamer and Monks2003), waiting to wick upright weeds until 8 WAP will result in increased sweetpotato yield loss due to competition prior to and between wicking applications (Coleman Reference Coleman2014; Meyers et al. 2016). To limit sweetpotato crop injury and subsequent yield loss, wicking equipment should be maintained in a way that limits the risk of herbicide solution dripping onto sweetpotato vines.