Published on behalf of The World Trade Organization
Journal Home 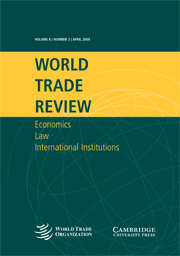