Home
The Nature of Human Intelligence

The Nature of Human Intelligence 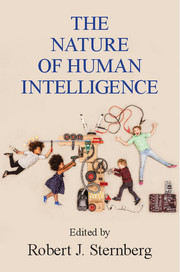 The study of human intelligence features many points of consensus, but there are also many different perspectives. In this unique book Robert J. Sternberg invites the nineteen most highly cited psychological scientists in the leading textbooks on human intelligence to share their research programs and findings. Each chapter answers a standardized set of questions on the measurement, investigation, and development of intelligence - and the outcome represents a wide range of substantive and methodological emphases including psychometric, cognitive, expertise-based, developmental, neuropsychological, genetic, cultural, systems, and group-difference approaches. This is an exciting and valuable course book for upper-level students to learn from the originators of the key contemporary ideas in intelligence research about how they think about their work and about the field.

‘This valuable collection by some of the most prominent scholars dealing with the study of intelligence synthesizes the vast body of knowledge surrounding psychology's most investigated concept. A brilliant and readable contribution that is bound to be a seminal contribution to our understanding of intelligence.'

‘Intelligence has been the most impactful, enduring, and controversial topic in psychology for more than a century. What is most striking about The Nature of Human Intelligence is how vital, lively, stimulating, and enriching the field is right now. This volume's distinguished editor calls successful intelligence the ability to achieve one's life goals. By this standard, the study of intelligence has achieved its goals and will do so for generations to come. A brilliant contribution.'

‘An eclectic and irresistible potpourri from the most accomplished intelligence scholars in the world, this provocative book will teach, enlighten, and occasionally outrage the reader. It will certainly change their thoughts on intelligence.'

'The book conveys fundamental discoveries and new ideas that attest to the vitality of intelligence research … Books like The Nature of Human Intelligence play an important role [in] supplementing undergraduate education beyond introductory textbooks.'