Published on behalf of Society of Antiquaries of London
Journal Home

Latest volume of The Antiquaries Journal 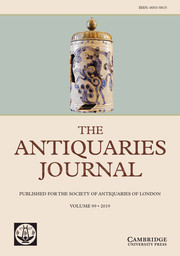