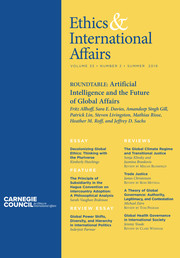 Roundtable: Artificial Intelligence and the Future of Global Affairs