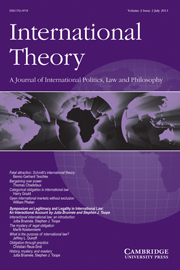 Symposium on Legitimacy and Legality in International Law: An Interactional Account by Jutta Brunnée and Stephen J. Toope