Special Issue: Colonial Volunteerism and Recruitment in the British Empire during the Great War 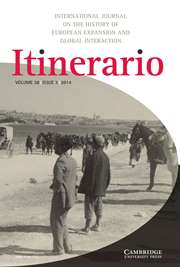