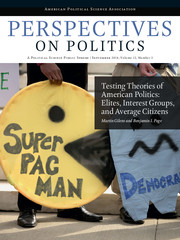 Cover Art: WASHINGTON, DC: October 8, 2013. Outside the Supreme Court, people demonstrate against money in politics. Inside, the Supreme Court heard oral arguments in McCutcheon v. Federal Election Committee, a first amendment case that would determine how much money an individual can contribute directly to political campaigns. On April 2, 2014, the Supreme Court struck down limits in federal law on the overall campaign contributions the biggest individual donors may make to candidates, political parties and political action committees. (Photo by Chip Somodevilla/Getty Images)