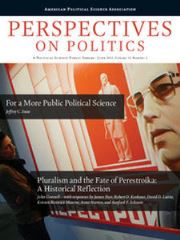 Cover art: MOSCOW - January 28, 2007. A visitor views “Revolution Perestroika?” by Russian painter Erik Bulatov at an exhibition for potential buyers and art experts of Sotheby‘s January 28, 2007, in Moscow. The auction, completely devoted to the Russian art of the XX-XXI centuries, took place in London on February 15, 2007. The lot sold at 198,000 GBP. The Sotheby‘s catalogue note described Bulatov and his work as follows: One of the most prominent aspects of Bulatov‘s art is the superimposition of text on illusionistic space and realistic representations, as can be seen in Revolution-Perestroika. The presence of text in this work evokes immediate associations with Soviet propaganda posters and banners, and alludes to the government‘s oppressive power over society. As Bulatov has explained, “Soviet ideology completely distorted our whole life. And this distorted space, full of ideology, became ordinary, customary and normal… Therefore, in my pictures, I tried to show that this kind of normality is not normal.‘ Another notable feature of Revolution-Perestroika is the tension between geometric and realistic imagery. An idealized architectural vista leads to the podium that contains a statue of Lenin, marking the transition between real, tangible existence and the visionary realm beyond. In the post-revolutionary era, a massive restructuring of society took place, accompanied by a burgeoning optimism. People were full of hope about a spiritual and material reconstruction that would affect the whole world. While Lenin dominates the compositional center of Revolution-Perestroika, Mikhail Gorbachev, another Soviet leader who also sought to change Soviet society, introducing his policies of glasnost and perestroika in 1986, intrudes very little upon the picture. Gorbachev‘s image obscures the slogan at bottom in such a way that the word perestroika (restructuring) is seen not in the noun form but as the imperative perestroi (restructure). (Photo by Oleg Nikishin/Epsilon/Getty Images)