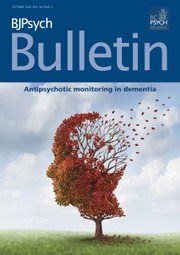 On the cover
Cover image

In this issue an interesting article by Anderson et al. (pp. 271–277) highlights how by using data collection forms to assess the prescribing of antipsychotics in dementia patients could help to identify areas of improvement in clinical practice.