An International Journal for the History of Medicine and Related Sciences 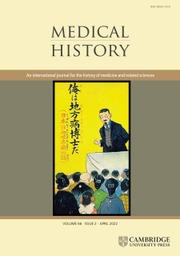