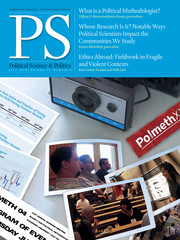 Symposium: Whose Research Is It? Notable Ways Political Scientists Impact the Communities We Study

Symposium: What is a Political Methodologist?