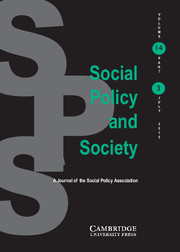 Themed Section on Hunger, Food and Social Policy in Austerity