Published on behalf of The Royal Institute of Philosophy
Journal Home 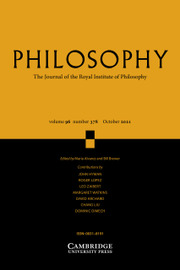