An International Journal of Comparative Politics

Latest issue of Government and Opposition 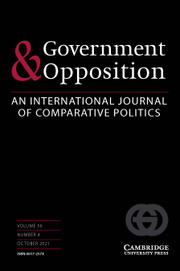