Skip to main content Accessibility help
Internet Explorer 11 is being discontinued by Microsoft in August 2021. If you have difficulties viewing the site on Internet Explorer 11 we recommend using a different browser such as Microsoft Edge, Google Chrome, Apple Safari or Mozilla Firefox.
Open global navigation
Cambridge University Press
Home
> Subjects
> A First Course in Network Science

A First Course in Network Science 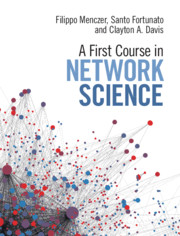 Networks are everywhere: networks of friends, transportation networks and the Web. Neurons in our brains and proteins within our bodies form networks that determine our intelligence and survival. This modern, accessible textbook introduces the basics of network science for a wide range of job sectors from management to marketing, from biology to engineering, and from neuroscience to the social sciences. Students will develop important, practical skills and learn to write code for using networks in their areas of interest -…