Skip to main content Accessibility help
Internet Explorer 11 is being discontinued by Microsoft in August 2021. If you have difficulties viewing the site on Internet Explorer 11 we recommend using a different browser such as Microsoft Edge, Google Chrome, Apple Safari or Mozilla Firefox.
Open global navigation
Cambridge University Press
Home
> Subjects
> A Student's Introduction to English Grammar

A Student's Introduction to English Grammar 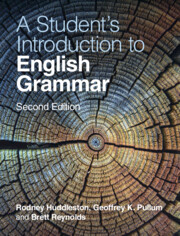 A new edition of a successful undergraduate textbook on contemporary international Standard English grammar, based on Huddleston and Pullum's earlier award-winning work, The Cambridge Grammar of the English Language (2002). The analyses defended there are outlined here more briefly, in an engagingly accessible and informal style. Errors of the older tradition of English grammar are noted and corrected, and the excesses of prescriptive usage manuals are firmly rebutted in specially highlighted notes that explain what older authorities have called 'incorrect'…