An Introduction to International Relations 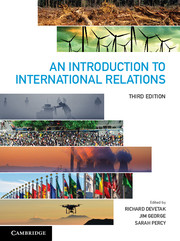 An Introduction to International Relations is a comprehensive introduction to the history,theories, developments and debates that shape the dynamic discipline of international relations and contemporary world politics. Bringing together an expert author team comprising leading academics from Australia and around the world, it allows readers to explore the discipline from both Australian and global perspectives. Known for its clear, easy-to-read style and relevant, real-world examples, the text has been fully updated and revised to reflect current research and the changing…