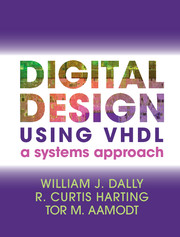 This introductory textbook provides students with a system-level perspective and the tools they need to understand, analyze and design digital systems. Going beyond the design of simple combinational and sequential modules, it shows how such modules are used to build complete systems, reflecting real-world digital design. All the essential topics are covered, including design and analysis of combinational and sequential modules, as well as system timing and synchronization. It also teaches how to write VHDL-2008 HDL in a productive and…