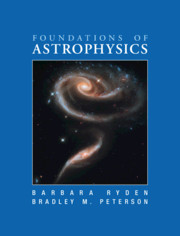 Foundations of Astrophysics provides a contemporary and complete introduction to astrophysics for astronomy and physics majors. With a logical presentation and conceptual and quantitative end-of-chapter problems, the material is accessible to introductory astrophysics students taking a two-semester survey course. Starting with the motions of the solar system and a discussion of the interaction of matter and light, the authors explore the physical nature of objects in the solar system, and the exciting new field of exoplanets. The second half of…