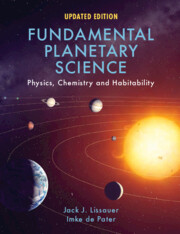 A quantitative introduction to the Solar System and planetary systems science for advanced undergraduate students, this engaging textbook explains the wide variety of physical, chemical and geological processes that govern the motions and properties of planets. The authors provide an overview of our current knowledge and discuss some of the unanswered questions at the forefront of research in planetary science and astrobiology today. This updated edition contains the latest data, new references and planetary images and an extensively rewritten chapter…