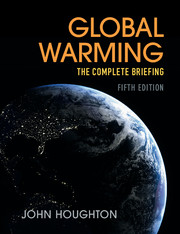 How much of global warming is due to human activities? How far will it be possible to adapt to changes of climate? Sir John Houghton's definitive, full colour guide to climate change answers these questions and more by providing the best and latest information available, including the latest IPCC findings. The simple, logical flow of ideas gives an invaluable grounding in the science, as well as the physical and human impacts of climate change, for undergraduate students across a wide…