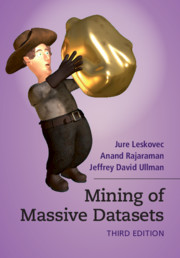 Written by leading authorities in database and Web technologies, this book is essential reading for students and practitioners alike. The popularity of the Web and Internet commerce provides many extremely large datasets from which information can be gleaned by data mining. This book focuses on practical algorithms that have been used to solve key problems in data mining and can be applied successfully to even the largest datasets. It begins with a discussion of the MapReduce framework, an important tool…