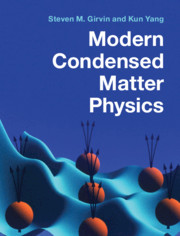 Modern Condensed Matter Physics brings together the most important advances in the field of recent decades. It provides instructors teaching graduate-level condensed matter courses with a comprehensive and in-depth textbook that will prepare graduate students for research or further study as well as reading more advanced and specialized books and research literature in the field. This textbook covers the basics of crystalline solids as well as analogous optical lattices and photonic crystals, while discussing cutting-edge topics such as disordered systems,…