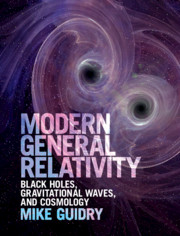 Einstein's general theory of relativity is widely considered to be one of the most elegant and successful scientific theories ever developed, and it is increasingly being taught in a simplified form at advanced undergraduate level within both physics and mathematics departments. Due to the increasing interest in gravitational physics, in both the academic and the public sphere, driven largely by widely-publicised developments such as the recent observations of gravitational waves, general relativity is also one of the most popular scientific…