An Introduction to Demography 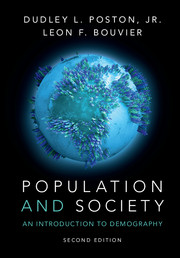 This comprehensive yet accessible textbook is an ideal resource for undergraduate and graduate students taking their first course in demography. Clearly explaining technical demographic issues without using extensive mathematics, Population and Society is sociologically oriented, but incorporates a variety of social sciences in its approach, including economics, political science, geography, and history. It highlights the significant impact of decision-making at the individual level - especially regarding fertility, but also mortality and migration - on population change. The text engages students…