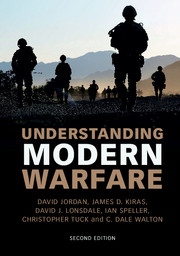 Understanding Modern Warfare has established itself as the leading introduction to the issues, ideas, concepts and context necessary to understand the theory and conduct of warfare in the twentieth and twenty-first centuries. It is an invaluable text for military professionals and students of military history. Key features include: incisive coverage of the debates surrounding contemporary and future warfare; accessible, yet sophisticated, discussion across the land, sea, and air environments; and coverage of contemporary topics such as drones, cyber warfare, and…