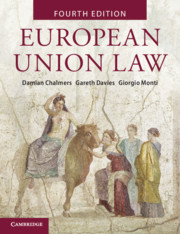 As the preferred choice on EU law for both teachers and students, this textbook offers an unrivalled combination of expertise, accessibility and comprehensive coverage. Written in a way which combines clarity with sophisticated analysis, it stimulates students to engage fully with the sometimes complex material, and encourages critical reflection. The new edition reflects the challenges facing the European Union now, with dedicated chapters on Brexit, the migration crisis and the euro area, and with further Brexit materials and analysis integrated…