Skip to main content Accessibility help
Internet Explorer 11 is being discontinued by Microsoft in August 2021. If you have difficulties viewing the site on Internet Explorer 11 we recommend using a different browser such as Microsoft Edge, Google Chrome, Apple Safari or Mozilla Firefox.
Open global navigation
Cambridge University Press
Home
> Subjects
> Governance and Politics in the Post-Crisis European Union

Governance and Politics in the Post-Crisis European Union 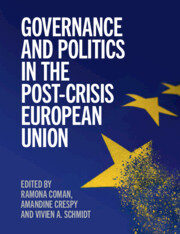 The European Union of today cannot be studied as it once was. This original new textbook provides a much-needed update on how the EU's policies and institutions have changed in light of the multiple crises and transformations since 2010. An international team of leading scholars offer systematic accounts on the EU's institutional regime, policies, and its community of people and states. Each chapter is structured to explain the relevant historical developments and institutional framework, presenting the key actors, the current…